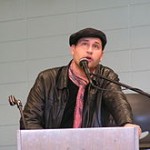 Andrej Grubačić is a US-based anarchist theorist, Balkan federalist, and university professor with a Yugoslavian background who has written on world history, world systems theory, anarchism and the history of the Balkans. An advocate of an anarchist approach to world-systems theory, Grubačić is one of the protagonists of "new anarchism", and a member of the anti-authoritarian, direct-action wing of the global justice movement. He is also a member of the International Organization for a Participatory Society. A partner with Peoples' Global Action and other Zapatista-influenced direct action movements, Grubačić's primary political investment is in Balkan struggles.He is a co-founder of Global Balkans network of Balkan anti-capitalists in diaspora. His writings and interests range from anarchist or 'participatory' education to the neo-marxist world-systems analysis, and from the hidden history of American democracy to the history of decentralized communities and mutual aid in the Balkans. His affinity towards anarchism arose as a result of his experiences as a member of the Belgrade Libertarian Group that derives from the Yugoslav Praxis experiment.