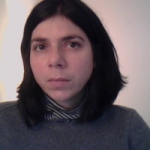 Eugenia Siapera has received her BSc (First Class) and MSc (Distinction) from the London School of Economics and Political Science. She holds a PhD in Social and Political Sciences from the European University Institute (Florence, Italy), with a thesis on social and political theory and European journalism. Eugenia has held positions at the University of Amsterdam, NL; Anglia Ruskin and Leicester University in the UK; and Aristotle University in Greece. She is currently Associate Director of the Future Media and Journalism Institute and Programme Chair of the MA Social Media Communication at the School of Communication in Dublin City University in Ireland.

Her current research interests are in the field of social and political theory and new/social media, multiculturalism and the media, media systems, online journalism, and radical forms of journalism.  Recent articles have appeared in Journalism Practice, Information Communication and Society, Journalism Studies and Culture Machine.  Eugenia is the co-editor (with Andreas Veglis) of the Handbook of Global Online Journalism (Wiley, 2012) and the co-editor (with Lincoln Dahlberg) of Radical Democracy and the Internet (Palgrave, 2007). She has written two books Understanding New Media, (Sage, 2011), Cultural Diversity and Global Media: The Mediation of Difference (Wiley, 2010). She is currently working on the second edition of Understanding New Media and on a co-edited special issue for Feminist Media Studies on Online Misogyny (with Debbie Ging).