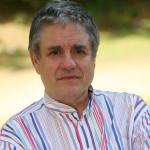 George has been active in social movements since 1969 when he participated in the anti-Vietnam War movement. A target of the FBI's COINTELPRO program (Counterintelligence), he was honored to be classified "Priority 1 ADEX".  For 11 years, he worked in Ocean Beach, California (as described at the end of Andre Gorz's book Ecology as Politics) in a radical countercultural community that fought against war.  After living in Berlin for 1 1/2 years and learning first-hand about the autonomous movement there, he wrote about that movement (The Subversion of Politics: European Autonomous Social Movements and the Decolonization of Everyday Life). For years, he was active for the cause of Palestinian rights. A graduate of MIT and UCSD (where he studied with Herbert Marcuse), he wrote his dissertation about the global movement of 1968 (published as The Imagination of the New Left: A Global Analysis of 1968). He has been teaching at Wentworth Institute of Technology in Boston.

In 2001, he did research at the May 18 Institute at Chonnam National University in Kwangju South Korea, especially focusing on the 1980 uprising. For 6 six years, he was editor of New Political Science and brought many unknown issues into public view, with special issues on the Sudan and one on the Black Panther Party (published as a book by Routledge--Liberation, Imagination and the Black Panther Party--coedited with Kathleen Cleaver.) A peace advocate by nature, he is also unwilling to tolerate injustice and work incessantly for the realization of his ideals.