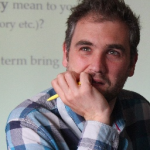 His academic career began with an interest in the role of technology in higher education. His research now extends more broadly to a critique of the political economy of higher education through categories such as value, labour, and the commodity-form. His research is practically focused on issues relating to workers’ control, industrial democracy and the creation of alternative institutional forms. It is theoretically informed by critical social theory, including the ‘new reading of Marx’, ‘Open Marxism’, value-critique, and elements of the Frankfurt School. In recent years, his writing has focused on the history and political economy of science and technology in higher education, its affordances for and impact on academic labour, and the increasing demands from academics and students for workplace democracy in higher education. In 2011, he co-founded the Social Science Centre, a co-operative for higher education in the city of Lincoln and he is currently leading funded research within this community education project. This research contributes to a number of sub-disciplines and contemporary research themes in the social sciences. These include the sociology of work and critical labour studies; the sociology of space; critical social theory; the sociology of education; the co-operative movement, social movements and activism; and the sociology of technology and information.

Before joining the University of Lincoln, he worked as audiovisual archivist for Amnesty International’s Secretariat (2004-8) and as a film archivist at the British Film Institute’s conservation centre (2002-4). He is a qualified film archivist, with an MA in Film Archiving from the University of East Anglia (2002). During the 1990s, he studied Zen Buddhism, first at the School of Oriental and African Studies, University of London (1993-96), and then the University of Michigan (1996-8). Between 1998-2001, he lived in Japan and acted as a conduit and curator for Japanese, European and American avant-garde film and video artists. Since 1996, he has  taught at all levels of education, from a Kindergarten and public school in Japan to undergraduate and doctoral programmes in the USA and UK, as well as informal adult education.