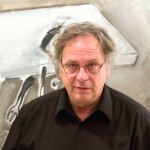 Kyriakos Katzourakis is a prolific artist who has experimented with all kinds of styles and genres, not just in painting, but also photography, film, video art and theatre stage sets. The publication of his latest book, 'Order into Chaos', coincided with the exhibition, and his latest film 'Small Revolts' which was screened at the Benaki Museum, Athens.

He lived and worked under the dark shadow of the junta in the 1960s and then moved to London in 1972 where his work took a different direction and led to an attempt to combine the two different worlds that he inhabited.
Part of the New Greek realist group, his work is imbued with a very strong political flavour. His art is a mixture of painful, almost clinical recording of reality but also an anarchist explosion of unordered images emanating from the land of dreams, instinctive association and nightmare. An able, critical reader of the narrative of the Hellenic 1930s generation, he entered into dialogue with those artists, as well as others that have influenced his work such as Bacon, Velasquez, Picasso. His greatest influences have been Tsarouchis and Caravaggio's chiaroscuro.

'Everything starts with painting', he says. 'People drew before they spoke. Our visual experience of the world comes first before everything else'.