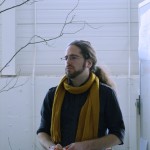 Max Haiven is a writer, teacher and organizer, and an Assistant Professor in the Division of Art History and Critical Studies at the Nova Scotia College of Art and Design. He holds a PhD in English and Cultural Studies from McMaster University and an MA in Globalization Studies from the same. He spent two years as a post-doctoral fellow in the Department of Art and Public Policy at New York University.  Based now in K’jipuktuk in Mi’kma’ki (Halifax, Canada), Haiven has been involved in student, peace, trade union, anti-racist and Indigenous solidarity struggles. Primarily, Haiven’s scholarly research has focused on the financialization of society and culture over the past forty years. He has published in journals including Social Text, Cultural Studies, Cultural Politics, Mediations, The Radical History Review and Cultural Logic.  His first scholarly monographCultures of Financialization: Fictitious Capital in Popular Culture and Everyday Life was published by Palgrave Macmillan in August of 2014. He is currently is co-director  of the Radical Imagination Project a ethnographic solidarity research initiative dedicated to understanding and enlivening radicalism and activism. Their writing about the project has appeared in journals including Affinities, Cultural Studies <=> Critical Methodologies, and Interface and their book The Radical Imagination: Social Movement Research in the Age of Austerity was published by Zed Books in July of 2014.  Haiven’s sole-authored academic work on the radical imagination has appeared in journals including Cultural Critique and The Review of Education, Pedagogy and Cultural Studies. He also frequently writes for non-academic venues, including Truth-Out, Dissident Voice, Art Threat, ROAR Magazine, Canadian Dimension and Znet.  His book Crises of Imagination, Crises of Power: Capitalism, Creativity and the Commons was published by Zed Books in March 2014.