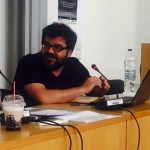 Theodore has researched literary Hellenism and published widely in the areas of literary and cultural modernism, with a special focus on mourning. He has more recently researched and taught in media studies and theory.

Theodore teaches across the undergraduate spectrum and in the Media Research Methods MA module. He has responsibility (design, coordination and delivery) for the social media modules (Consuming and Producing Social Media (level 4) and Social Media: Applications and Debates (Level 5). Originally a literary and critical theory scholar (BA [Athens], MA, DPhil [University of Sussex]), researching in the areas of literary and cultural modernisms, since 2010 Dr Koulouris has been teaching and researching in the field of media studies and theory.

He has been teaching media studies at the University of Brighton for the past three years and, since 2013, has led the social media theory modules for levels 4 and 5 (years 1 and 2).

Theodore’s first monograph, Hellenism and Loss in the Work of Virginia Woolf (2011), constitutes the first book-length study of Woolf’s intriguing relationship with British Hellenism and classical Greek literature; it explores Woolf’s engagement with Greek through the lens of death and mourning, and draws on hitherto unpublished material, the so-called ‘The Greek Notebook’ (1907-1909), a writing notebook in which Woolf kept notes, translations and analyses of Greek texts (including texts by Homer, Plato, Euripides et al.). The book has been reviewed widely and very positively by leading scholars in the field (Emily Dalgarno, Norman Vance) in prestigious scholarly journals.