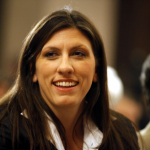 Zoe studied law at the Law School of the University of Athens, International and European Law at Paris X Nanterre and a post-graduate course at Sorbonne on European Criminal Law and European Anti-crime Policies. In parallel, in 1998–2000, she participated in the French prisoners education programme, teaching English at the Fresnes Prison. In 2001, she worked at the International Criminal Tribunal for the former Yugoslavia. She then completed a second post-graduate course on Human Rights and Criminal Law at Columbia University, while working at the office of the Greek Permanent Representative to the United Nations.

Since 2003 she has been an active lawyer in Greece, focusing on penal and international criminal law and human rights. She first stood for office in the 2009 European elections for SYRIZA, and was elected for the first time to the Hellenic Parliament in the May 2012 election for Athens A. Re-elected in the June 2012 election, she served in the 2012–14 parliament as a member of the committees on Institutions and Transparency, Public Order and Justice, European Affairs, the Permanent Public Administration Committee, and the Inter-party Committee on German War Reparations.

On 6 February 2015, after SYRIZA's victory in the January 2015 election, she was elected as the youngest President  of the Hellenic Parliament.