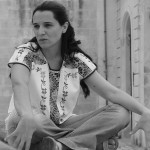 Lucia dedicates much of her vital energy and daily efforts to consolidate collective and autonomous projects. She has founded and integrated El Merendero de Papel (critic librarians' cooperative) and participates, among many other women and men, in the construction of Casa de Ondas, an autonomous space in Mexico's City center, where various collectives try out -day after day- ways to recreate forms of social life that have their center in cooperation and self -organization.

She is a researcher and professor at the ICSyH (Instituto de Ciencias Sociales y Humanidades), research institute, which belongs to BUAP (Benemérita Universidad Autónoma de Puebla).

Her researches are focused on reflecting about how to combine the communitarian network and  the commons and she became organized right in between of the contemporary global capitalist's expansion processes. She is the author of the book “Cuando manda la asamblea. Lo comunitario-popular en Bolivia: una mirada desde los sitemas comunitarios de agua de Cochabamba” (2015).